Since the middle of last year Killet GeoSoftware Ing.-GbR release their Geodetic Development Kit GeoDLL with geodetic calculations of Time Zones and Daylight Saving Times for embedding in your own computer programs. New and until now worldwide unique in the current GeoDLL version 10.15 is the consideration of Maritime Territorial Limits in determining country-specific Time Zones from geographical coordinates. Thus the Time Zone of a country can be accurately determined when entering the respective Maritime Territorial Zone. 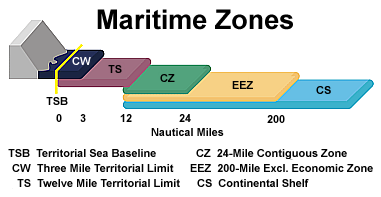 The Sea Baseline follows the low-water line along the coast of a state. It is the base to measure the seaward limits of a state's territorial sea and all other Maritime Zones. From country to country different the Three and Twelve Mile Territorial Limits define sea areas which are regarded as the sovereign territory of the state. In the 24-Mile Contiguous Zone a state can exert limited control, for example police powers with respect to immigration and customs control. Inside the 200-Mile Exclusive Economic Zone a state has control of all economic resources, for example fishing, mining of natural resources and exploration.

The 408 worldwide Time Zones follow predominantly the borders and maritime territorial lines of countries or their subdivisions. GeoDLL can calculate Time Zones from geographic coordinates that comes for example from a GPS receiver. From the coordinates the Time Zone is determined involving the coastline of the desired Maritime Zone with high accuracy. Thus the clocks of a ship, plane or other means of transport can be set depending on the position and the Daylight Saving Time status of each country automatically to local time.

Plate Carrée EquiRectangular Projection
© Killet GeoSoftware Ing.-GbR Time Zones supported by GeoDLL are based on a uniform naming convention, designed by Paul Eggert. They correlate to offsets from Coordinated Universal Time (UTC) as a number of hours, such as "America/New_York, UTC-5". Many countries use Daylight Saving Time (DST) in bright seasons, typically by changing clocks one hour forward. Unfortunately, the start and end dates of Daylight Saving Time in countries are handled differently. GeoDLL takes this into account and calculates the Time Zone parameters UTC, DST and start/end dates of the Daylight Saving Period for all countries and Time Zones exactly. An online-manual of GeoDLL with detailed function descriptions for software developers is available at https://www.killetsoft.de/h_geodll_e/handbuch_e.htm.

new languages can be added at any time by creating new language files. Everybody who is interested can translate a new language file into his native language for himself and all users.
Author: Dipl.-Ing. Fred Killet
Page name: t_1503_e.htm
Page views: 44
Period: since Januar 1, 2023