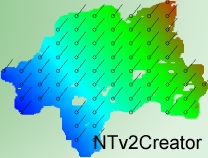 The geosoftware NTv2Creator provides a powerful development tool for the modelling and creation of accurate NTv2 files from identical points in two different Reference Systems The software analyses two files with identical points and suggests the boundaries and mesh sizes which can then be changed manually. Finally, a highly accurate NTv2 file is generated using small-scale three-dimensional 7-parameter Helmert transformations around each grid point and subsequent Natural Neighbour Interpolation for residual gap distribution. NTv2Creator provides three different mathematical models for the creation of NTv2 files.

History of Changes and Supplements 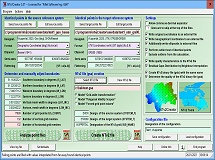 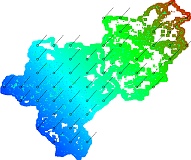 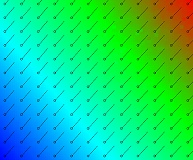 NTv2 means "National Transformation Version 2" and describes a method for the transfer of georeferenced data from one Reference System to another. Originally developed in Canada, it has grown to a worldwide standard. Many countries use NTv2 files to homogeneously transform country-specific geotopographic data into new, continent-wide Reference Systems.

The advantage of the NTv2 method is that it is available as a standard method in many geodetic transformation programs and GIS. Furthermore, there are some RunTime-Libraries, which support an implementation in own software. Examples are the program TRANSDATpro for worldwide coordinate transformations and the Geodetic Development Kit GeoDLL by KilletSoft.

So much about using already existing NTv2 files. But how is an NTv2 file created from a cloud of irregularly distributed geodetic points in a base point field? First of all, all points of the base point field must be available as so-called identical points, which have been precisely measured and calculated in two different reference systems. From the identical points, the shift values of the grid points for a defined working area are elaborately calculated in a one-time process and stored in an NTv2 file. Since modelling an NTv2 file is a very time-consuming process, a lot of time must be expected depending on the size of the working area, the number of identical points in the base point field and the fineness of the grid meshes.

In order to create an NTv2 file, first of all some characteristics concerning the extension of the grid, the mesh size, the ellipsoids of the source and target reference systems and some designations for the reference systems and for the grid have to be defined. The program NTv2Creator writes this data in a file header and in a grid header of the NTv2 file. In the ASCII variant, you can see this clearly in plain text. The shift values of the grid points and quality characteristics are entered behind the headers. There are four decimal numbers for each grid point. These are the shift values for the latitude and longitude of the grid point and the quality characteristics for the latitude and longitude of all grid points.

The quality feature of the grid point results from the weighted distance of the identical points that have been collected to determine the 7 parameters of the Helmert transformation. The quality feature varies from 1.0 for the highest quality and goes close to zero for lower qualities.

An NTv2 file always contains a "rectangular" grid with defined boundaries. The three mathematical models differ only in the handling of so-called fault points. Fault points are defined as grid point that lie inside the rectangle but outside the actual working area, which is usually represented in a polygonal structure. Furthermore, fault points occur when the identical points found around a grid point are too inhomogeneous to realize a small-spatial Helmert transformation.

The newly created NTv2 binary file is verified by cross-calculation and the result is stored in a cluster field. Bad matching identical points are determined and suggested for rectification. Such so-called outliers can also be excluded from the calculation by a program setting.

The program NTv2Creator is equipped with an up-to-date graphic user surface which handling can be understood intuitively. For each window detailed help texts can be shown. The country dependent layout of the user surface can be chosed from different languages.

The program NTv2Creator is equipped with a modern graphical user interface of which handling is to understand intuitively. For each window detailed help texts can be shown. The detailed electronic documentation of the program NTv2Creator is available in both English and German language. However, the user interface can be represented in many languages. For this purpose, external language files are used. When starting the program, it notes which language files are available in the calling directory. The found languages then are provided for selection in a list box. By

creating new language files, new languages can be added by users to the program NTv2Creator at any time.

The program NTv2Creator can be run on most common networks. The client installations works automatically. It is possible to use Terminal Services on WINDOWS Servers like e.g. "Citrix Terminal Server".

Pricing and ordering information can be found in the

Price list. For available licensing options have a look to the

License page. Order the program with the electronic

downloaded as ZIP packed file by the Internet.

Use of an illegal program version

Managing Director Fred Killet explains why you should never use an

new languages can be added at any time by creating new language files. Everybody who is interested can translate a new language file into his native language for himself and all users.
Author: Dipl.-Ing. Fred Killet
Page name: p_ntca_e.htm
Page views: 213
Period: since Januar 1, 2023