Killet GeoSoftware Ing.-GbR - short: KilletSoft - is a software company, which was established in the year 1991. The society is divided into the ranges "Geodetic Standard Software", "Development Tools for Geoinformatics" and "German Geodata". The focal trades of the companies supplied by KilletSoft are consulting engineers, GIS developers, Internet marketing, public utilities, logistics, telecommunications, security and public services.
•

Connecting the Coordinate Reference System to the surface of the earth

In order to accurately measure the surface of the earth in an area, surveyors have created there over time a complex network of measuring points firmly embedded in the ground, called reference points or benchmark monuments. By measuring the angles and distances between the reference points, the latitude and longitude have been determined for each of them.
Relating those reference points into a group forms the basic data set for a Reference Frame. One or more Coordinate Reference Systems calculated from this Reference Frame are the basis for all geodetic tasks and for all types of surveying, mapping and navigation in the surveyed area. Thereby the Coordinate System, i.e. the representation form of the coordinates, can indeed vary.

Components of the Coordinate Reference System

The components of the Coordinate Reference System and the requirements for the data transfer of coordinates are illustrated schematically in the following diagram. 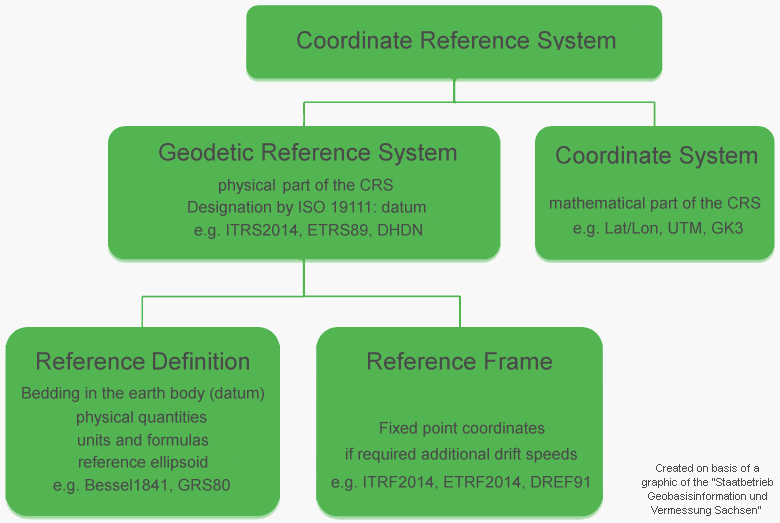 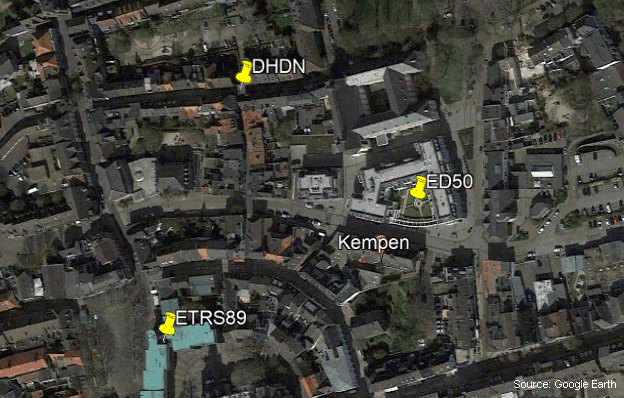 A special feature is to be considered with the conversion of coordinates of a fixed Reference System into the Reference System WGS84, which refers to the gravity centre of the earth, and with the appropriate back calculation. The WGS84 is a dynamic Reference System that is influenced by the continental drift of the different continental plates. This process describes the slow movement, splitting, and unification of continents on the earth's globe. The time course of this movement is constantly documented in the form of ITRS epochs. In addition to the parameters already described, the reference frame of the continent with the ITRS epoch at the time of the measurement or coordinate transformation is required for calculations from and into WGS84. WGS84 coordinates can be accurately transformed to a fixed Coordinate Reference System only if the ITRS epoch of the WGS84 coordinates is known.
As an example, the Reference System ETRS89 which is fixed for the Eurasian Plate is considered here in more detail. At the 1989.0 epoch, the ITRS and the ETRS were identical. At this time, ETRS89 has been defined for the Eurasian Continental Plate and has been identified with the suffix 89. ETRS89 is firmly tied to the Eurasian Plate via fundamental stations and moves with about 2.5 cm per year over the global system defined by WGS84. It follows that the coordinates from an accurate current GPS measurement in the WGS84 Reference System in Europe can deviate by up to 80 cm from the actual coordinates in ETRS89.

Designation of the Coordinate Reference Systems

TRANSDATpro can convert coordinates between many Coordinate Reference Systems. The same applies to the Geodetic Development Kit

GeoDLL, which allows the embedding of geodetic functions, e.g. coordinate transformations, into own software. For coordinate transformations with the WGS84 Reference System, continental drift is considered in both tools by applying ITRS epochs. Detailed information about the software and the possibility to download trial versions can be found on the Internet site of KilletSoft. The installation of the software is very easy and can be done with just a few clicks.

new languages can be added at any time by creating new language files. Everybody who is interested can translate a new language file into his native language for himself and all users.
Author: Dipl.-Ing. Fred Killet
Page name: t_2105_e.htm
Page views: 946
Period: since Januar 1, 2022