The NTv2 (National Transformation Version 2) file standard was developed by the "Department of Natural Resources of Canada" in the middle nineties. Using NTv2 grid files it is possible to transform geodata from one coordinate reference system to another with very high accuracy. An NTv2 file contains one or more quasi-rectangular grids with shift values. Instead of a rectangular area only an embedded polygonal area should and must be covered, for example, a state territory within the country borders. This article describes how Polygonal Validity Scopes can be realized in NTv2 files using a new developed software.
The program NTv2Poly developed by KilletSoft realizes Polygonal Validity Scopes in NTv2 files. Using so prepared NTv2 files, coordinates outside the validity scope can be excluded from calculations or they can be acknowledged by a warning. This works with coordinate transformations using the geospatial software TRANSDATpro and GeoDLL by KilletSoft and with GIS programs which support Polygonal Validity Scopes.

Inclusion of polygonal outlines from a shape file
The Polygonal Validity Scope is realized with a shape file, which contains the outlines of the scope as polygons. The file format Shape is developed by ESRI as a format for geographical objects. For example, in the shape file the border outlines of a country may be stored, which represent the polygonal scope for the NTv2 file used in that country. The polygons contained therein must be available as geographic coordinates in decimal notation. The reference system of the outline coordinates must correspond as closely as possible to the source reference system of the NTv2 file. A shape file in a different coordinate reference system can be converted into the required system using the geospatial software TRANSDATpro by KilletSoft. Using the program NTv2Poly the polygons of the shape file and the quasi rectangular surface of the NTv2 file are superimposed one on the other and processed in an ingenious manner.
The dBase and index files normally associated with a shape file are not needed. The object file with the polygons, which has the file type ".shp" in the file name, is sufficient. The content of the shape file can consist of a single polygon or multiple polygons. These may occur with or without sub-polygons in the shape file. This is the case if, for example, a national border with the islands belonging to the country is to be displayed. Another case would be the polygons of subordinate administrative units, such as states or districts that make up a country. Decisive are only the outer borders of the entire object. The shape file can contain the outline of the required area in the following polygon compilations:

Please click on the images shown in the following text, so that they will be enlarged for a closer look. 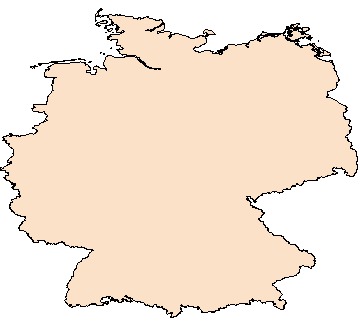 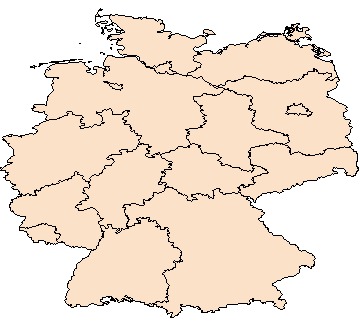 Fig. 1a shows the country outline of the Federal Republic of Germany. In Fig. 1b are the outlines of the sixteen Federal States, which together represent the country outline of Germany. Although the contents of the two shape files shown here are different, they will produce the same result when used in the NTv2Poly program.
Outline files in shape format can be downloaded in different quality from some websites. If you want to be sure about the quality, the resolution and the used reference system, you should ask for a suitable outline file at the responsible authorities. 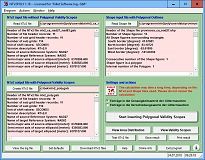 Fig. 2 shows the surface of the program NTv2Poly as screenshot. At the top left, the NTv2 file to be processed is read in, which does not contain Polygonal Validity Scopes yet. The adjacent text box displays all information about this NTv2 file and its grids. To the right of this, the shape file intended for realizing the Polygonal Validity Scopes is read in. The adjacent text box lists information about the shape file and all therein contained polygons. At the bottom left, a new NTv2 file is generated. After starting the processing, the NTv2 grids of the source file are transferred and provided with polygonal scopes. Above the start button between two types of processing can be selected, which are described in more detail below:

To implement polygonal validity scopes, a GIS software can query exopolygonal entries in the four shift and accuracy values of the grid meshes. During the calculation of reference system transitions, the coordinates that are to be transformed are examined for their association with such grid meshes. It is crucial whether the grid mesh is part of a parent coordinate grid or of a therein contained child coordinate grid. In case it lies in a child grid, the attempt is to continue the calculation in the parent grid lying below. When grid meshes fitting to a coordinate are marked by exopolygonal entries in all hierarchically stacked child and parent grids, then the coordinate is outside of the polygonal validity scope. It is excluded from the calculation of the reference system transition and the executing software can generate an indication.
In the example shown in Fig. 5, three coordinate grids are arranged one upon the other. Only when a coordinate falls through all exopolygonal grid meshes it lies outside of the polygonal validity and is excluded from the reference system transition.
The source code developed in the programming language C for the evaluation of NTv2 files with Polygonal Validity Scopes in Hierarchical grid structure can be purchased as a license by manufacturers of GIS and geodetic software for use in own software from at the engineering society KilletSoft GbR.

Graphical representation of an NTv2 file before and after processing
The following two figures are evaluations from the program NTv2Poly. For each of the 862 thousand grid meshes contained in the grids of the NTv2 files, a test-wise coordinate transformation has been performed. Valid results are shown in different light blue shades depending on the grid. The quasi-rectangular grids of the NTv2 files are shown as red frames. 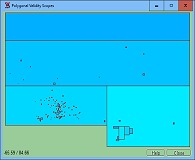 Fig. 6 shows the structure of an NTv2 file from whole Canada as developed and published by the Canadian authorities. Of course, this NTv2 file does not use Polygonal Validity Scopes. It contains 114 NTv2 grids. There are four basic grids arranged side by side with many small local grids on top of them. The small local grids map the large cities and densely populated regions with smaller grid meshes in higher accuracy. The quasi-rectangular ground grids capture very large areas, which lie outside the territory of Canada. 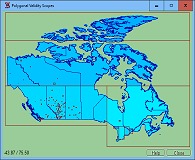 Fig. 7: Polygonal Validity Scopes as an example of Canada
Fig. 7

Fig. 7 shows the same NTv2 file, but this time with Polygonal Validity Scopes. In this representation, the national boundaries, or better the boundaries of the Canadian provinces, that are taken from the shape file are displayed in dark blue. All test-wise calculated coordinate transformations in the grid meshes outside the country boundaries were identified as invalid and not entered in the graphic. The number of effective grid meshes shown here is reduced to 644 thousand. It can be clearly seen that the scope of the quasi-rectangular grids is limited by the national borders of Canada. Thus, in grid meshes outside the country boundaries performed coordinate transformations can be excluded from calculations with an indication of their invalidity. 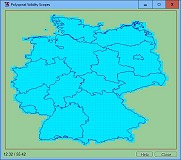 Fig. 8: Polygonal Validity Scopes as an example of Germany
Fig. 8

Fig. 8 shows an NTv2 file of the Federal Republic of Germany. This file has only one grid. Using the shape file described above, which contains the outlines of the sixteen Federal States of Germany, the NTv2 file has been equiped with Polygonal Validity Scopes. In this figure, the separate meshes can be seen well, because the mesh size in relation to the shown area is relatively large. When creating the NTv2 file with the program NTv2Poly, the exopolygonal entries have replaced the accuracy values of the grid meshes. It is very good to recognize that all grid meshes within the state boundary remain valid. In addition, all grid meshes of the border area are valid, which have a point of contact with the state boundary.

https://www.killetsoft.de/p_ntpa_e.htm. There you can also download a free trial version. With the test program you have the possibility to generate new NTv2 files with Polygonal Validity Scopes using some supplied NTv2 files and shape files.

new languages can be added at any time by creating new language files. Everybody who is interested can translate a new language file into his native language for himself and all users.
Author: Dipl.-Ing. Fred Killet
Page name: t_1808_e.htm
Page views: 56
Period: since Januar 1, 2023