Killet GeoSoftware Ing.-GbR - short: KilletSoft - is a software company, which was established in the year 1991. The society is divided into the ranges "Geodetic Standard Software", "Development Tools for Geoinformatics" and "International Geodata". The focal trades of the companies supplied by KilletSoft are consulting engineers, GIS developers, Internet marketing, public utilities, logistics, telecommunications, security and public services.
•

KilletSoft provides solutions for problems with large NTv2 files in GIS and Geosoftware.
With a new program and new features of GeoDLL it is possible to copy from very large
NTv2 files, such as BY_KanU and BWTA2017, only the required areas into smaller NTv2 files.
April 12, 2018
Dipl.-Ing. Fred Killet - Killet GeoSoftware Ing.-GbR - Escheln 28a - 47906 Kempen, Germany

For Bavaria and Baden-Wurttemberg (Germany) NTv2 approaches already exist with very high accuracy in the centimeter range, which are suitable for the transformation of spatial thematic data of the real estate cadastre. The high point density required for this results in a high count of meshes in the NTv2 files. As a result, the file sizes of the NTv2 grid files for the two large-area Federal States are enormous. For example, the NTv2 file BY_KanU_Bayern-gesamt.gsb, just in development by the Bavarian Surveying Administration, has a volume of more than 3.18 gigabytes. The productive file BWTA2017 of the Federal State of Baden-Wurttemberg has still a size of 374 megabytes.
The use of such large NTv2 files is a new trend that developers of geodetic software and GIS could not anticipate. Thus it is not surprising that BY-KanU by a lot of software products can not be used. Here, the file size exceeds the by "long integer" addressable file range of about 2.2 gigabytes. Often the grids of the NTv2 file are held in memory due to the calculation speed. However, this is usually not possible with such large grids as contained in BY-KanU and BWTA2017. These problems can be eliminated only with a great development effort and require a certain changeover time. 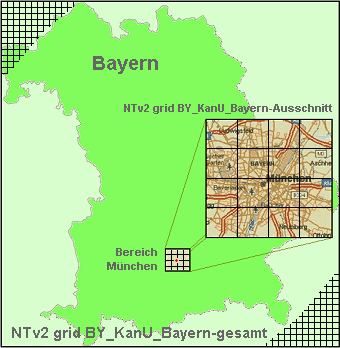 KilletSoft has developed a tool as part of its GeoDLL, which allows to copy out a required area from a large NTv2 file by defined corner coordinates. The separated area is placed in a new NTv2 file that is much smaller than the original. Thereby all grids whose area intersects the given area are taken into account. The newly generated NTv2 file now can be used as usual in all geodetic programs and GIS. If, for example, only the Munich area is needed for coordinate transformation using NTv2, with the KilletSoft tool it can be cut out from the Bavarian NTv2 file BY-KanU by defining the corner coordinates of the area of Munich. In a test, conducted by KilletSoft, the resulting NTv2 file only had the 120th part of the original file size.
Beside NTv2 coordinate transformations and datum shifts GeoDLL contains several functions for manipulating NTv2 files:

In addition to NTv2-based coordinate transformation, these features as of now can be placed into your own software products using KilletSoft's GeoDLL. Shortly, another function will be available to customize NTv2 files with their Polygonal Validity Scope (see

working paper dated Dec., 2015). For this a shape file with the outer borders of the validity scope area will be used. KilletSoft will soon develop a computer program that will apply the functions mentioned here to NTv2 files. Still in this year, KilletSoft will introduce another program that can generate own NTv2 files from identical points in two different frames of reference.

CRS
What actually is a Coordinate Reference System?

GeoDLL 32Bit + 64Bit
New sales concept for the Geodetic Development Kit GeoDLL. Both releases 32Bit and 64Bit together now have the same price as before only one of the two releases.

The EU Business News Magazine from Great Britain has given the "EU Business Award 2020" to KilletSoft.

NTv2Creator
We provide professionals in geodesy and surveying with an economical standard software that allows them to generate accurate NTv2 solutions on their own.

NTv2 Toolbox
Geosoftware with Tools for analyzing and processing of NTv2 files.

new languages can be added at any time by creating new language files. Everybody who is interested can translate a new language file into his native language for himself and all users.
Author: Dipl.-Ing. Fred Killet
Page name: t_1804_e.htm
Page views: 156
Period: since Januar 1, 2021