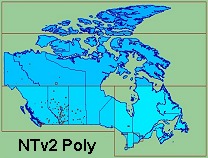 The user interface currently can be displayed in English, German and Slovenian language.

We are looking forward to receive any further languages into which the program NTv2Poly is translated and would like to publish such language files with the next software release. As reference material the existing language files in English and German, developed by KilletSoft, can be used. Please contact us by E-Mail prior the establishing of a language file, to avoid any overlapping. Please feel free to contact us if you have further questions.

As a reward for the full translation of a language file, the translator will receive a free licensed full version of the program NTv2Poly!

new languages can be added at any time by creating new language files. Everybody who is interested can translate a new language file into his native language for himself and all users.
Author: Dipl.-Ing. Fred Killet
Page name: p_ntpm_e.htm
Page views: 33
Period: since Januar 1, 2023